For the last 6 months I’ve been working for SVI Themed Construction on the sound design for a large art installation in the Hartsfield-Jackson Atlanta International Airport by Steven Waldeck called Flight Paths.

Now that we are in the final month of putting it all together, I thought it would be good to share some of the progress.

Flight Paths has been quite an undertaking, spanning the entire 420 feet of the walkway between Terminal A and B of the Airport. The installation uses dramatic LED lighting imbedded into a custom manufactured canopy, video, lighting , 96 discreet channels of audio and 89 speakers.

There are four areas to each side of the installation; Forest, Clearing, Swamp and Pond. Visitors travel through the areas along the moving walkway between Terminal A and Terminal B. Each area provides a unique audio/visual experience. The audio delivery system is being handled by Ableton Live with Max 4 Live. I’ll post more info regarding the sound design and equipment in future posts as the project moves along to completion.
My main focus this month is tweaking the sound design and mixing the audio in the space. Mixing in the space is particularly challenging given the number of speakers, spatial movement between speakers (which follow visual events) and the need to mix remotely as the control rooms are up to 300 feet away from the installation! Remote mixing is being handled with TouchAble on ganged Airport Extremes and Desktop remote running on a MacBook Pro.
Big shout out to CEI Audio/Visual installers for all their work getting the hardware together!

The project has been a wonderful opportunity and I’m very grateful to have been invited to provide the sound design. And I’m looking forward to the return of my “regularly scheduled programming” writing music, recording and playing shows! New collaboration with Adam Holquist (onewayness) is recorded and siting on a shelf waiting to be mixed. Tour to follow 😀 and of course new dRachEmUsiK and Faux Pas Quartet music and shows.
Must. Be. Patient.

Here are some pictures of the current state of the installation and one of me looking “official” (ha!) with my special badge. The badging experience was quite an event and very much like being thrust into one of the office scenes from the movie Brazil…

Side A Audio Rack 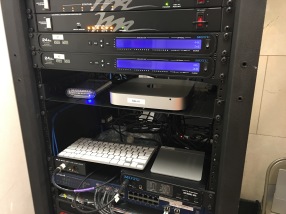 Side A Audio Rack 2 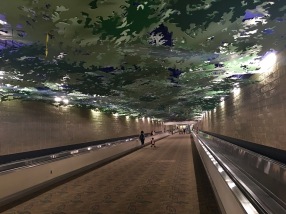 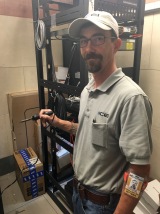 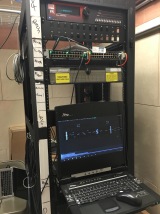 Yesterday morning, May 8th, 2016 my Dad died at the age of 96. There is no need for condolences. He was ready and death was not unexpected.
He had a good run. His life was filled with music, travel and many interesting experiences.
I’m grateful to have had the opportunity to understand him as a human being and to engage with him in ways that transcended the “father and son” dynamic. 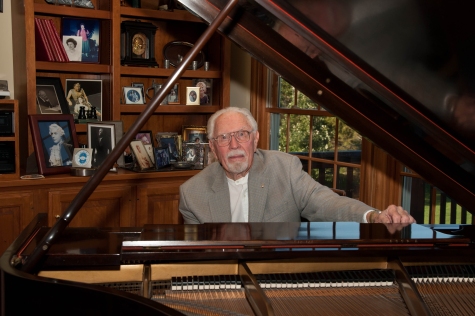 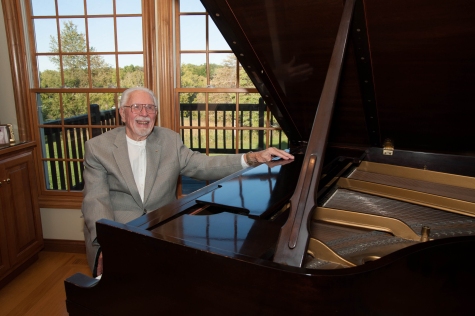 Bill Shriner, a member of The Greatest Generation who became a nationally-broadcast opera singer performing on top stages all over the world, died on May 8th, 2016 in Bloomington, Indiana.  Mr. Shriner was a Professor of Voice at Indiana University for thirty years until his retirement in 1985.  Prior to his appointment to the Music School faculty he was a leading baritone with the New York City Opera, Fort Worth Civic Opera, Houston Grand Opera and the NBC Opera Theater.  He sang leading roles in Merry Wives of Windsor, La Boheme, the Marriage of Figaro, Cosi Fan Tutte, Carmen, Faust, Romeo et Juliette, Rape of Lucretia, Parsifal, The Valkyrie and Die Fledermaus.  He also appeared as MacHeath in Carnegie Hall in a revival of The Beggars Opera.

He made his concert debut at Times Hall in New York in 1951 and was signed by National Concert Artists Corporation to appear in Civic Music programs throughout America.  For the next few years he sang concerts in forty-two of the then forty-eight states.  In addition to Mr. Shriner’s work in opera and he was one of the first of the so-called “serious singers” to move with ease to the light opera and musical theater stages.  His appearances at Washington’s Wolf Trap, St. Louis’ Muni, and Kansas City’s Starlight theater and others were noted for their vocal and histrionic brilliance.  He sang leading roles in Annie Get Your Gun, Roberta, Rio Rita, Naughty Marietta, New Moon, Desert Song , and Rose Marie.  He was considered a quintessential Billy Bigelow in Carousel, and was even briefly considered for the film version that ultimately starred Gordon MacRae.

He was born in Houston, Texas on Oct. 25th, 1920, and began his musical studies in Texas.   In 1938 he was part of the first graduating class from the then new Mirabeau B. LaMar High School.  While he was in high school, he played violin, bass horn and trumpet.  He was a graduate of Baylor University, earning a Bachelor of Music degree in 1942 and a Bachelor of Arts in 1943.  During this time he married his first wife, Ms. Billie Guynes and had three children: Ms. Deborah Shriner Casati, Ms. Diana Shriner, and Mr. Charles Williiam Shriner, Jr.    While at Baylor, Mr. Shriner studied Voice with Robert Hopkins.  He also studied with Paul Reimers, head of Voice Dept. of the Julliard School of Music, and Ms. Clytie Mundy, New York City,  and was coached by Otto Herz, Thomas Martin, Desiree Defrere, Arpad Sandor and Felix Wolfes.   Mr. Shriner performed under the direction of conductors Peter Hermann Adler, Eric Leinsdorf, Josef Rosenstock, Julius Rudel, and Edwin MacArthur.  At Indiana University, his students included Mark Baker, Carole Farley, Roger Havranek, Joseph Levitt, Alan Montgomery, Jeffrey Springer, Kris Vail, and William Vessels.

Mr. Shriner was a veteran of World War II.  Commissioned as an ensign in October, 1943, he was detailed on the U.S.S. Ancon, an amphibious command ship, aboard which the now famous battle recording by Blue Network (later known as ABC) broadcaster George Hicks was made during the D-Day invasion at Omaha Beach.  Hicks interviewed Mr. Shriner while he was under fire as the twin battery gunnery officer.  Hicks’s broadcast also recorded Mr. Shriner shooting down the first German plane by a surface vessel on D-Day.  When the first Mrs. Shriner opened the Fifth War Bond drive, the record and transcription of Hicks’s broadcast were auctioned, raising more than $100,000. Later, Mr. Shriner participated in the Okinawa invasion in the Pacific Theater.  He resumed his musical career after his discharge in 1946.

In addition to his three children, three grandchildren (Anthony Casati, Christopher Casati and Aaron Gershon) and three great-grandchildren, Mr. Shriner is survived by his wife, Christine Margaret Cook Shriner, whom he married in 1972.

A memorial service is planned at St. Marks United Methodist Church in August.  In lieu of flowers, memorial contributions may be made to the United Methodist Foundation of Indiana for the “Shriner Memorial Music Endowment.”

The release On December 2nd, 2015, in the USA… by Urbster1 and dRachEmUsik is comprised of four, live, unedited improvisations. The music employs elements of Dark Ambient, Glitch, Drone, Noise and Avant-Jazz.
This music was created two days after the mass shooting in San Bernardino, CA. While we didn’t specifically set out to create music based on that horrific event, the shootings and related events clearly had an influence on our creative process. 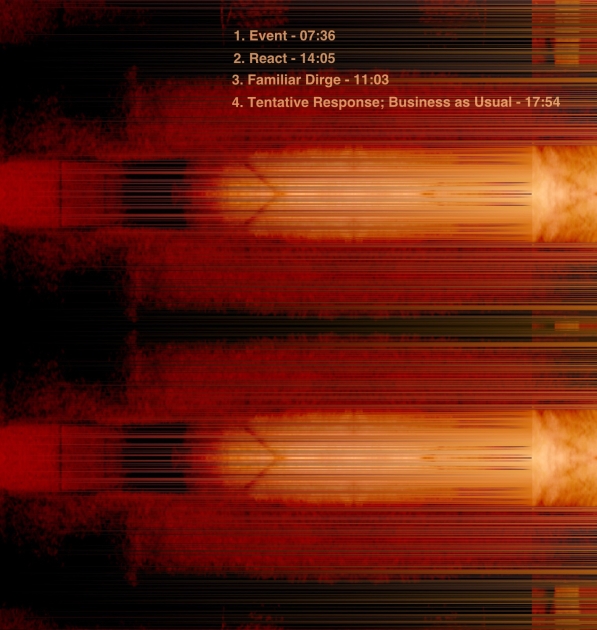 A Picture of the Sky – Live Improvisations Vol. 3, is the final installment of three live releases by critically acclaimed, collaborators onewayness and dRachEmUsiK.
These recordings were made during their Summer 2014 tour in support of their release Immeasurable.

A Picture of the Sky – Live Improvisations Vol. 3 is a collection of three improvisations created during performances at the Lemp Neighborhood Arts Center, St. Louis, MO and The Cincinnati Public Library, Cincinnati, OH. The music includes ambient, drone, glitch and musique concrète.

A Picture of the Sky Vol. 3 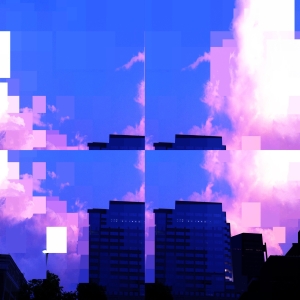 A Handful of Dust Vol. 2

The Silence is a Lie Vol. 1

Tune in and Join us in chat! radio.electro-music.com

The studio is finally completely finished and I’ve been up and running for a few weeks. Here are some real world working pictures of the space. The room sounds great and is incredibly comfortable and versatile. 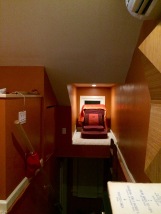